27/12/61 to 6/1/1962
Dog sledge party consisting of Alan Precious, Dave Easty, Eric Jones and John Skilling travelled south and crossed onto the inland ice in the general area that later became known as "Bob-Pi". - Obtained from map of sledge journey supplied by Alan Precious.

20/1/62
Mike Jarman and Bob Lee made first Muskeg crossing onto the inland ice. They returned at midnight the same day, having travelled for 16 hours. The photograph below is of Bob beside the depot of man and dog food which formed the original Bob-Pi dump. - from my diary, written at the time.

23/2/62
Martin Winterton and George Blundell basically followed the Muskeg tracks left by Mike and Bob and then spent some time flagging a route through the disturbed area to the north of the Bob-Pi dump, returning to base on 28/2/62. The sledge report refers to a cairn which they found - they assumed that this cairn had been left by Alan Precious and Co. - from my diary and the sledge report.

16/3/62
Martin Winterton and Mike Bethell set out with the dog team to go to Bob-Pi. Other than the fact that they had a successful trip I have no further details as I stopped keeping my diary around this time, because I started to work at night doing auroral observations.

October 62
The next trip to Bob-Pi was with both Muskegs. The intention was to lay a large dump of food and fuel for a planned Muskeg trip to the Tottan Mountains the following year. The trip was led by Chris Brown and I think Bob Lee was the tractor mechanic, but I am not sure as I was still not writing a diary. I am also not sure how many were in the party, but as there were 2 Muskegs I suspect there were 4 personnel.

24/10/62
The start of the long dog trip with Martin Winterton and Stuart Marsden. They reached Bob-Pi on 26/10/62 where they were held up by bad weather. They were about to start on the 29th when they met the Muskeg party returning after laying the depot about 77 miles east of Bob-Pi - this became known as "middle dump", that is half way to the Tottans (although in fact it was somewhat less than half way). - from the sledge report.

5/11/62
From my diary, which I restarted today. - The second Muskeg trip left base today with 2 muskegs and with two main objectives:

The trip was again led by Chris Brown with Paul Whiteman as tractor mechanic and also including Doug Finlayson, Chris Ruffell, Frank Bent and George Blundell. Bob-Pi was reached at 4pm today. From the sledge report this was the very day that Martin and Stuart arrived at Middle Dump (at 6-40pm).
The plan now was that Chris Ruffell and Frank Bent would organise the hut that had been towed to Bob-Pi and then man haul back to base.
From my diary. - The rest of the party set out on Nov 6th towards Middle Dump, arriving there at 2-30pm on Nov 8th. The Muskegs left to return to base at 5-30pm with Chris Brown, Paul Whiteman, Doug Finlayson and Stuart Marsden. Martin Winterton and George Blundell stayed the night at Middle Dump and then continued east again the following morning.
Martin and George eventually returned to base on 24/12/1962, passing through Bob-Pi on 23/12/1962 (after consuming a tin of peaches and signing the visitors book in the newly established hut).

Map of the Bob-Pi
(Click to see a larger version) 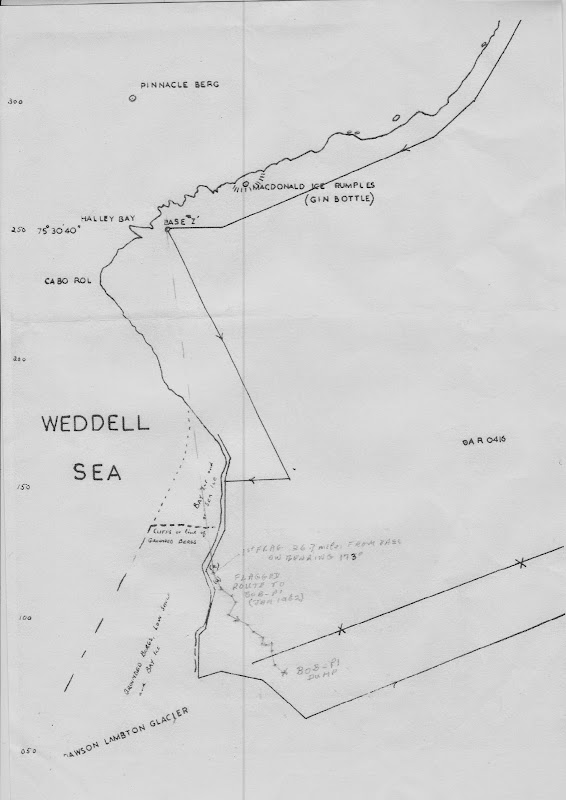 This is part of Alan Precious' map of his sledge journey 27/12/61 to 6/1/1962 with Dave East, Eric Jones and John Skilling, showing the route (black lines) taken by the party. I have attempted to overplot (grey lines and annotation) the route through the crevassed region that was flagged by Mike Jarman and Bob Lee and then by Martin Winterton and myself. The routes appear to cross near the first flag, and Alan's route goes within about 2 miles of the Bob-Pi dump. I don't guarantee the accuracy of my plotting, but it is clear that Alan and co. crossed onto the inland ice in the general area of Bob-Pi.